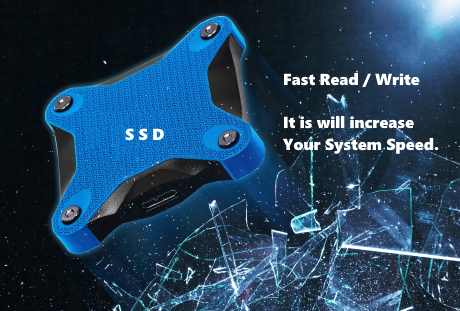 What is a Solid-State Drive (SSD)?

A solid-state drive (SSD) is a new generation of storage device used in computers. SSDs replace traditional mechanical hard disks by using flash-based memory, which is significantly faster. Older hard-disk storage technologies run slower, which often makes your computer run slower than it should. SSDs speed up computers significantly due to their low read-access times and fast throughputs.

How to Make old PC fast

Answere is SSD. Replace Your HDD with SSD

Is SSD better than HDD?

The difference between hard drives and solid state drives is in the technology used to store and retrieve data. ... HDDs are cheaper and you can get more storage space. SSDs, however, are faster, lighter, more durable, and use less energy. Your needs will dictate which storage drive will work best for you.

Why is SSD faster?

Rather, information is stored in microchips. Conversely, a hard disk drive uses a mechanical arm with a read/write head to move around and read information from the right location on a storage platter. This difference is what makes SSD speed so much faster.
HP SSD, Buy from Amazon

SSD are of 3 Type.
Usually SSD are the same but they way they are connected into the system makes the difference in speed.

You might be knowing the SATA cable. They have the theoratical limit of 6Gbps or 760 MBPs.
SSD can perform much faster. but when SSD were introduced SATA was the standard.
So SSD with SATA port gives you about 500MBPs read and 250-300 MBPs write Speed.
It is comparitivly cheaper. and comes in 128GB/250GB/480GB/1TB or 2TB.

NVMe SSD is much smaller and super lightweight. They can be installed into laptop and desktop.
If your mother board is having the m.2 port, you can directly connect the NVMe SSD.
If you Laptop is not having M.2 port then you need adapter. Adapter will be connected to PCIe port of your motherboard. Then you can connect your SSD to Adapter since it will have m.2 port in it.
NVMe SSD will give you 1200MBPs read speed and 750 MBPs write speed.
Well if you opt for Samsung EVO NVMe SSD, then they will give upto 3500 MBPs. They are bit expensive and generally fit well with high end system.
Putting SATA SSD or SSD with m.2 is best option.

The NVMe SSD which directly goes into PCIe slot is the fasted type of the SSD.
It is fairly expensive but boosts the system performance at next level.

SSDs have specific benefits in the following areas: